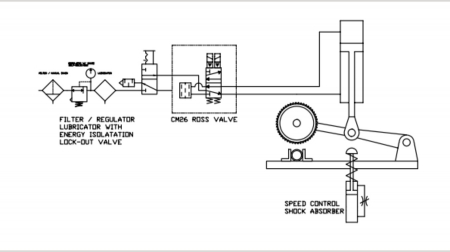 In recent history, we have had customers bring us some Auto Cut-Off saw applications. The following is an application overview of multiple applications condensed into one. Not all had exactly the same features and needs, but together they are merged and represented below.

This application was a repurposing on old pneumatically controlled circular saw heads into new production cut off saws.

The saw head featured a large diameter blade, pneumatic rapid up, rapid down – until just above the work piece, and then a controlled decent through the work piece by a rate control (think shock absorber). The blade – when raised retracted into a guard and eliminated access to the hazard of the blade teeth.

At any time while the saw was in motion, if the light curtain was broken, the CM26 redundant 5/2 safety valve would rapid return the saw blade up – cylinder fully extended to safe position and also drop out the current to the saw motor.

The valve was sized for flow / speed to return the saw head quickly. The light curtains were placed sufficiently far back for the reaction and travel time of the saw head.


Contact us today if you have a unique problem that the Donald Engineering can assess and engineer the right solution! 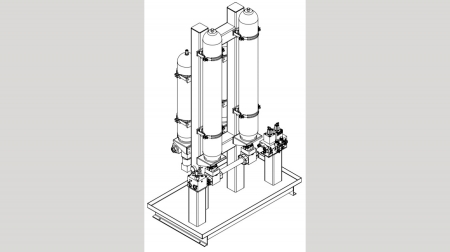 One of our customers had a challenging problem: Quickly move a large cylinder and briefly transmit a massive amount of energy in a safe (Cat 3 PLd), fast, and cost effective solution. Cost effective in purchase price and also operating costs.

The cylinder needed to extend 12+ inches and retract in less than a second while delivering tonnage throughout the extension stroke.

Along the process there were secondary issues that we addressed:


Instead of a massive power unit with a large tank and 150 HP motor – with all its expense in electrical, we designed an accumulator system to store energy between cycles and a second accum system to deal with the extreme return tank surge flow. 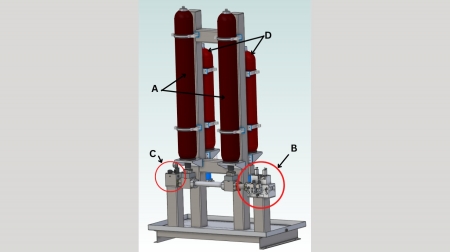 
​We accepted the customer challenge to provide a safer, faster, and more cost effective solution.

Our customer now has the ability to deal with massive return surge flow to the tank in a safe way.

Contact us today if you have a unique problem that the Donald Engineering can assess and engineer the right solution!

Donald Engineering is open and ready to help get your machinery back to business.

Sign up to receive the DE Pilothouse Newsletter in your email.